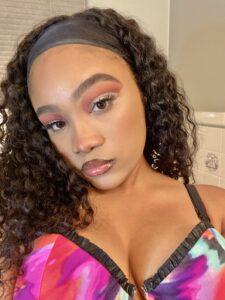 N’dia Moné is a singer, songwriter, activist and YouTuber. She began her influencing career in February 2014 when she started creating music videos and covers of fan songs. She didn’t start to gain popularity until October 2020, when she started blowing up on tiktok due to her continued activism and unwavering support for BLM.

N’dia has been singing professionally since the age of about 10. She has been a choir for 8 years in her schools where she learned to improve her musical skills and improve her vocal performance. She has also performed numerous choral solos and performed in numerous talent shows and even auditioned for America has Talent and The Voice. N’dia recalls a time in grade 6 when she overcame her stage fright by auditioning for her school’s talent show, “It was liberating,” she said.

N’dia used her new audience to promote her music while supporting oppressed groups of people and raising awareness of many global issues. On January 23, 2021, N’dia Moné released their first single “BWD”, an R&B track that is all about self-love and getting the love you deserve.