Nahid Hassan Munna is a popular teacher, writer, founder and CEO of Nahid24. Nahid24 is one of the largest online education platforms in Bangladesh. You can find it on Youtube and Google Play Store. Every day, he teaches more than 3 lakh students for free on YouTube and Facebook. His reputation among college students and admissions tests is now that of a young writer who brought a sense of novelty beyond writing.

He was born on October 18, 2000 in the village of Uttar Durakuti in

the Kishoreganj Upazila of Nilphamari district. His father’s name is Md. Monowarul Islam and his mother’s name is Bilkish Begum. He completed Secondary from Kishoriganj ML Model High School in Nilphamari District and Upper Secondary from Rangpur Border Guard Public School and College. He then graduated from the Department of Information Science and Library Management, Rajshahi University. Nahid Hasan Munna was very fond of playing cricket since his childhood. Played cricket with many cricket teams from village to district level and showed very good batting, bowling and holding performance. Later, he was admitted to North Bengal Cricket Academy, Rajshahi after getting a chance at Rajshahi University. I enjoyed this taught love game for a few more years.

Nahid Hassan Munna is also a minor singer. From school life to university life, he performed many songs on many stages. He also has a music YouTube channel. Channel name – Song Nahid24. A teacher called him Song Nahid after seeing his singing prowess in his college life. From this inspiration, he named this song channel – Song Nahid24 in line with his previous YouTube channel.

He enjoys teaching students. From this love, he founded online education based on 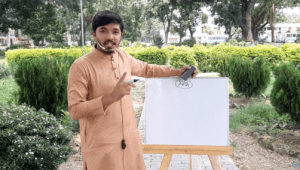 ‘Nahid24’ platform in 2015. With the help of this platform, information and lectures on various academic and other topics are created and videos are made freely available to people. Thus, Nahid Hasan Munna has contributed greatly to making education easily accessible. He also regularly creates educational content on social media to help students develop their professional orientation and thinking. He is also the publisher of Nahid24 Publications which is a very popular name among HSC and admission students. 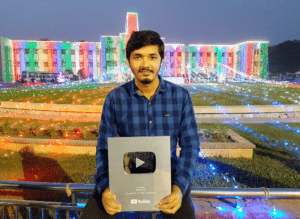 Nahid Hassan Munna married Jannati Jiniya, a writer and also a teacher, in a traditional Muslim wedding ceremony on February 5, 2021.

Now he is not only a content creator but also an editor and writer. His book ‘Bangla A Plus’ written for HSC students, is now the bestseller in Rokomari. Moreover, his books, ICT Magic, GK Magic, Bangla Magic, English Magic, and Witten Magic, are very popular among students seeking admission into public universities.

The story of the YouTube channel “Nahid24”, which was formed on the power of criticism.

Nahid Hassan Munna was criticized by his friends for his educational and creative work on YouTube while in college.

It is so popular that it has students in almost every college, madrasa and university in the country. And to admitted students, he is known as “Magic Sir”.

Although Nahid24 is currently one of the best online educational platforms in Bangladesh, but its initial journey has not been smooth. He told us that in 2015, when he was a student uploading educational videos to YouTube, many people laughed at him and questioned his qualifications. Even though his video was standard, he didn’t have a college label, so he had to wear it in the face of various criticisms. He couldn’t explain to them that varsity tags aren’t enough to make educational videos.

According to him, “The person who wants to teach something must have the knowledge in him and the necessary skill to present the subject in front of the students in a simple and pleasant way. He also said that when he asked a friend to grab his cell phone’s rear camera for the first video shoot, the friend grabbed him for 2 minutes and said, “Damn who the fuck is going to watch your video!” Nahid Hasan Munna said a friend of his once joked to him, “How many 24s don’t have rice, and you come Nahid24! Hundreds of omissions and criticisms resulted in the realization of his dream Nahid24. Today Nahid24 channel has surpassed 2 lakh subscribers, and this number is increasing every day. However, these critical friends are now seeking his advice on how to do better in life. This is the hard truth of life. When you try to do something good in life, others will try to push you back. Because they never want you to succeed in life. Thus, to succeed in life, according to Nahid Hasan Munnar, one must not lose one’s desire to work in the criticism of others. Turn criticism into strength, achieve something good in life, respond to it, prove yourself worthy. Force the critic to praise you.

In 2022, his amazing educational app Nahid24 is launched on Google Play Store.

Special features of the Nahid24 application:

Nahid24 educational app has been launched in Google Play Store with all these features. Nahid Hasan Munna hopes that students of all levels will benefit from his educational platform Nahid24 and that the app will soon become everyone’s favorite due to its magnificent features.