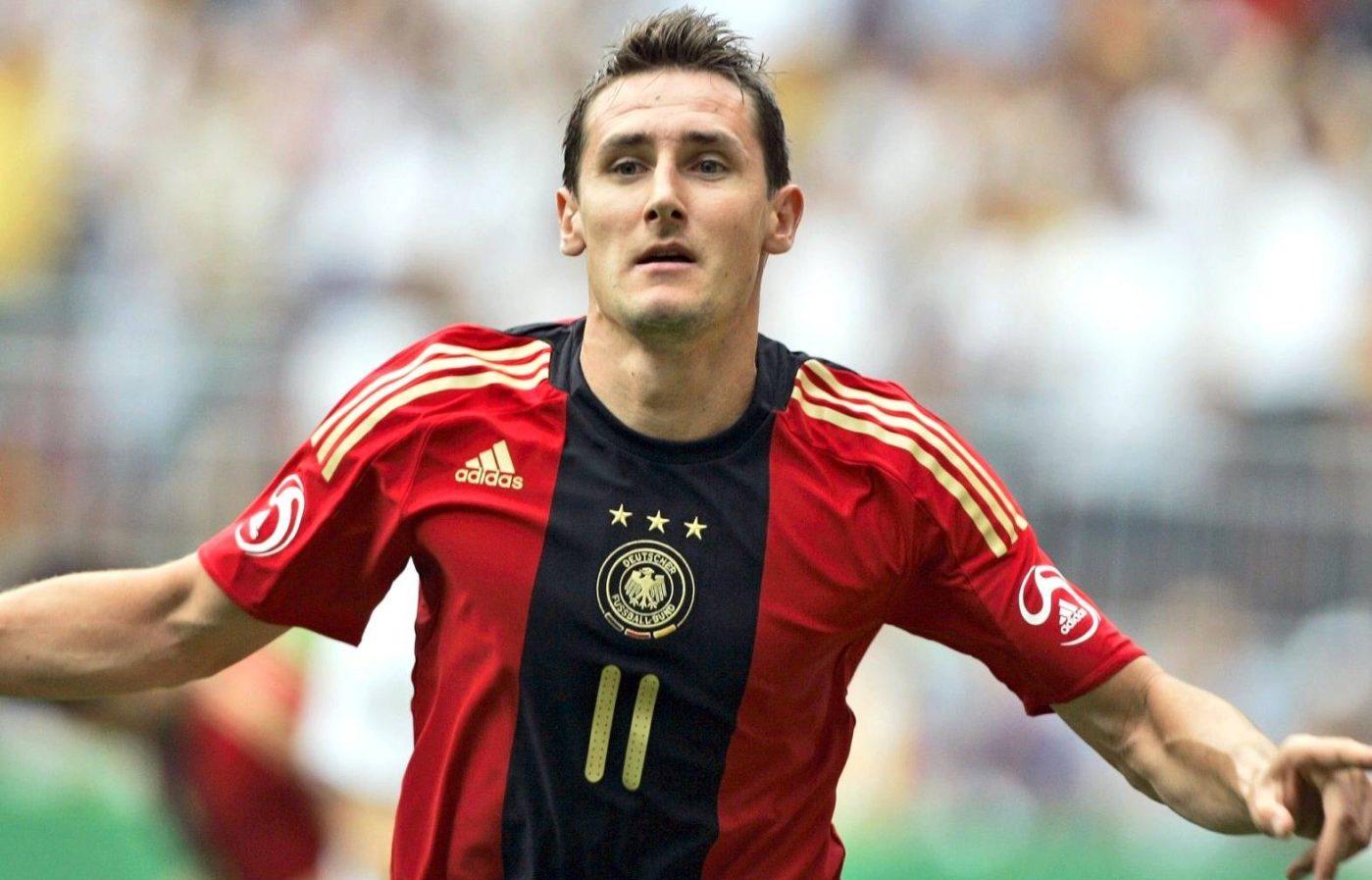 Miroslav Josef Klose, professionally known as Miroslav Klose He is a retired German soccer player. He is currently the coach of the U17 youth team at Bayern Munich. He was a prolific scorer for his club and country during his career as a player. He started his football career as a striker for FC 08 Homburg and then played for 1. FC Kaiserslautern, Werder Bremen, Bayern Munich and Lazio. For clubs, he scored 231 goals in 599 appearances in all competitions during his career as a player. He is the top scorer of all time for Germany with 71 goals. He led his country to win the 2014 FIFA World Cup. Shortly after winning the FIFA World Cup, he retired from international football on August 11, 2014.

Why is Miroslav Klose famous?

Where was Miroslav Klose born?

Miroslav Klose was born on June 9, 1978. His birth name is Miroslav Josef Klose. His birthplace is in Opole in Poland. He was born of a father, Josef Klose, and a mother, Barbara Jez. His zodiac sign is Gemini. His father was of German ethnicity and German national. Josef returned to Germany after World War II. 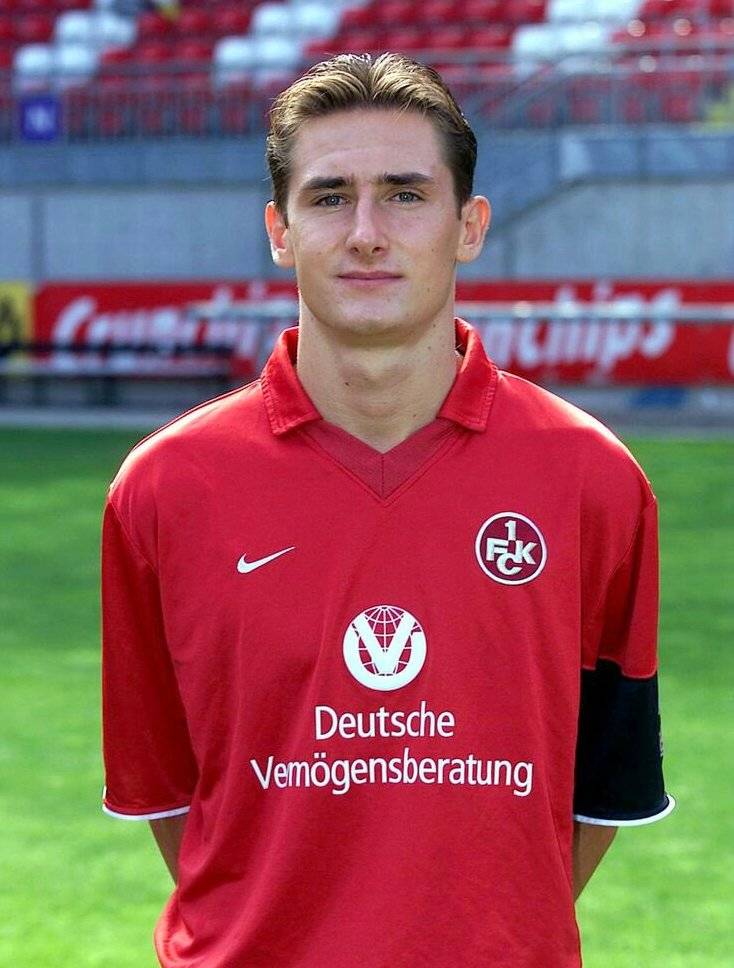 He began his professional career at FC 08 Homburg in 1998.

He moved to the second team of FC Kaiserslautern in 1999.

He made his Bundesliga debut in April 2000.

He scored 52 goals in 147 appearances in all competitions for the club. 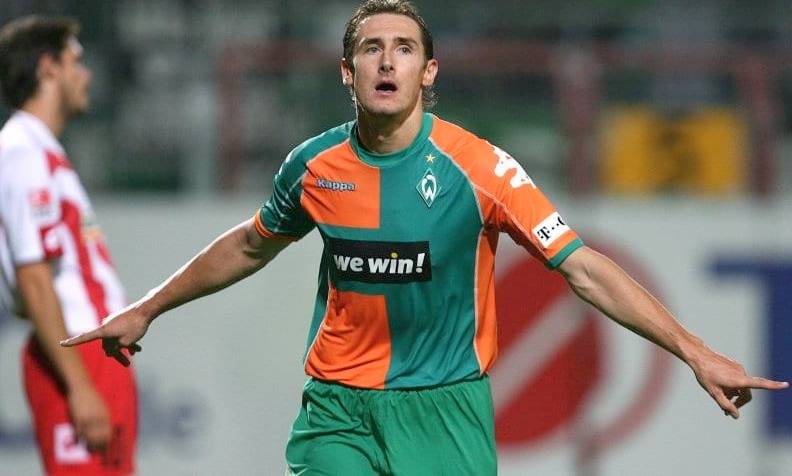 He signed a four-year contract worth 5 million euros with Werder Bremen in March 2004.

He made his league debut for Bremen against Schalke 04 in August 2004.

He scored his goal for Bremen against VfL Wolfsburg in the same month.

He spent 3 seasons at the club and scored 63 goals in 132 appearances in all competitions. 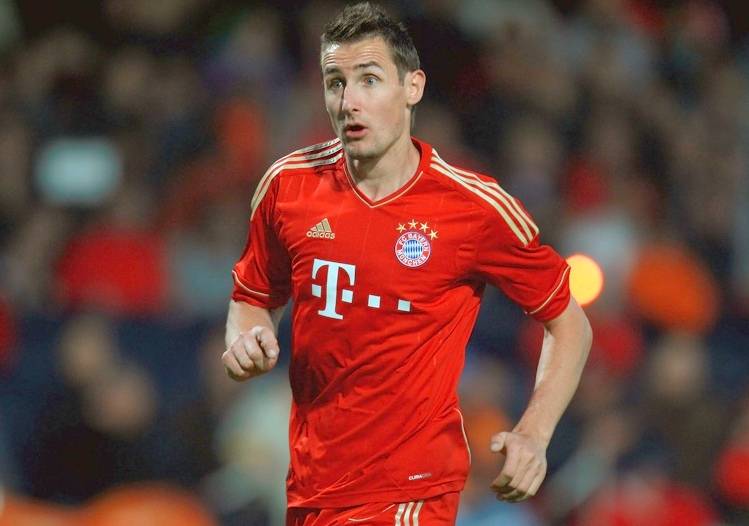 He signed a four-year contract with Bayern Munich in June 2007.

He spent 4 seasons at the club and scored 53 goals in 149 appearances in all competitions.

He won important club trophies while he was in the club.

His contract at the club was about to expire in 2011. The club and Klose did not reach an agreement to renew their contract. 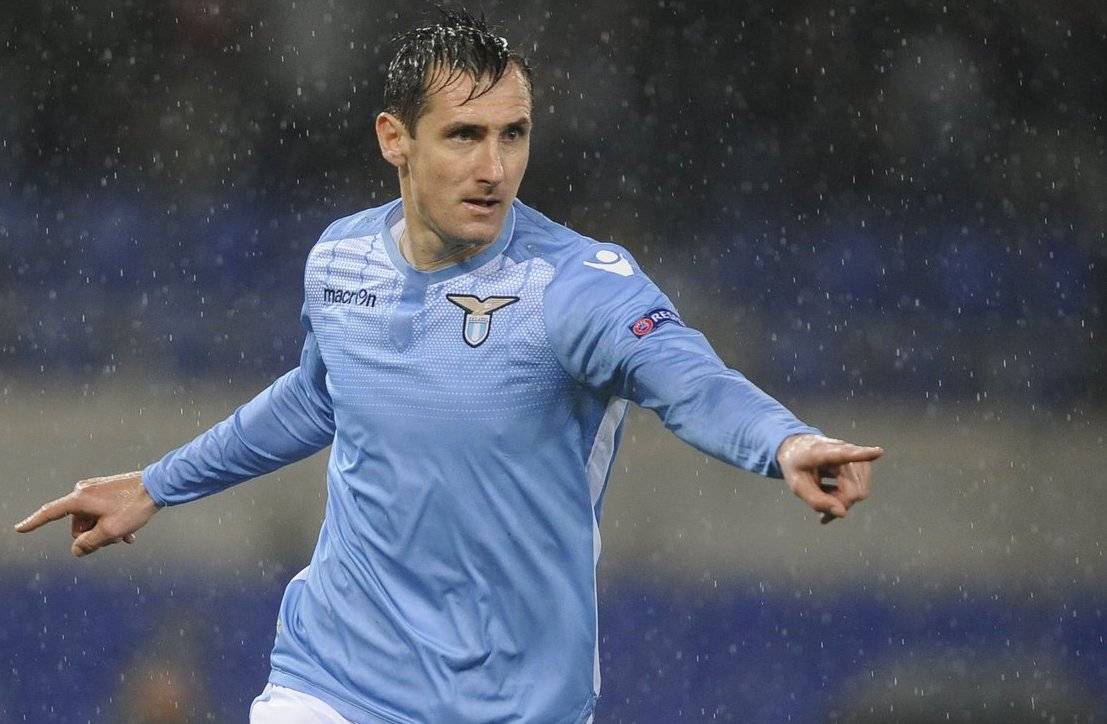 He signed a three-year contract with the Italian club Lazio in June 2011.

He made his Serie A debut against Milan in September 2011.

Klose accidentally scored a goal with his hand, without being seen by the referee, against Napoli on September 26. Klose showed great sportsmanship by informing the referee and asked him to discount the goal. The referee then reversed and discounted the goal.

He played his last game for Lazio on May 15 on the last day of the 2015-16 season of Serie A. He scored his final goal for Lazio from a penalty in the same game.

He scored 64 goals in 170 appearances in all competitions for Lazio.

He became the all-time joint non-Italian scorer of the club (along with Goran Pandev).

He also finished with the seventh top scorer of all time of the club. 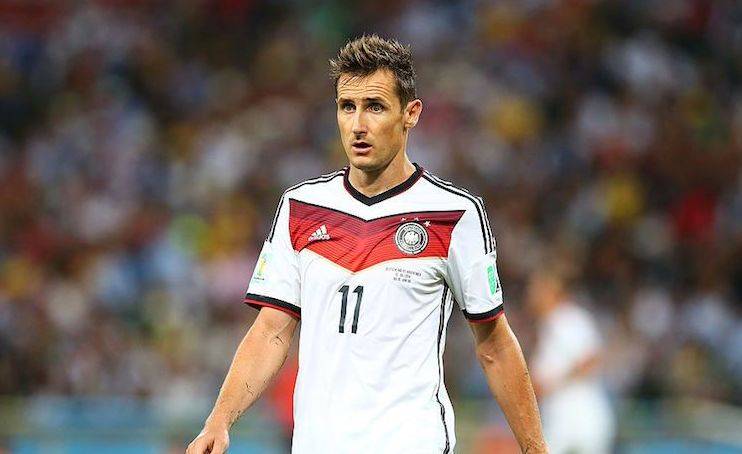 He made his international debut in a qualifier for the 2002 FIFA World Cup against Albania in March 2001.

He entered as a substitute in the 73rd minute and scored his first international goal in the same match.

He represented Germany in the 2002 FIFA World Cup, where he was the second top scorer with Rivaldo with 5 goals. It also helped the country finish second. Germany lost 2-0 to Brazil.

Germany was eliminated from the group stage in Euro 2004.

Germany finished as runner-up in Euro 2008, where Klose scored only 2 goals. Germany lost to Spain 1-0.

Germany finished the 2010 FIFA World Cup in third place, where Klose scored the second highest top scorer with 4 goals. He finally won the World Cup in 2014 when Germany defeated Argentina 1-0.

He also beat Brazilian Ronaldo to become the all-time scorer of the FIFA World Cup with 16 goals.

A month after winning the World Cup, he retired from international football. 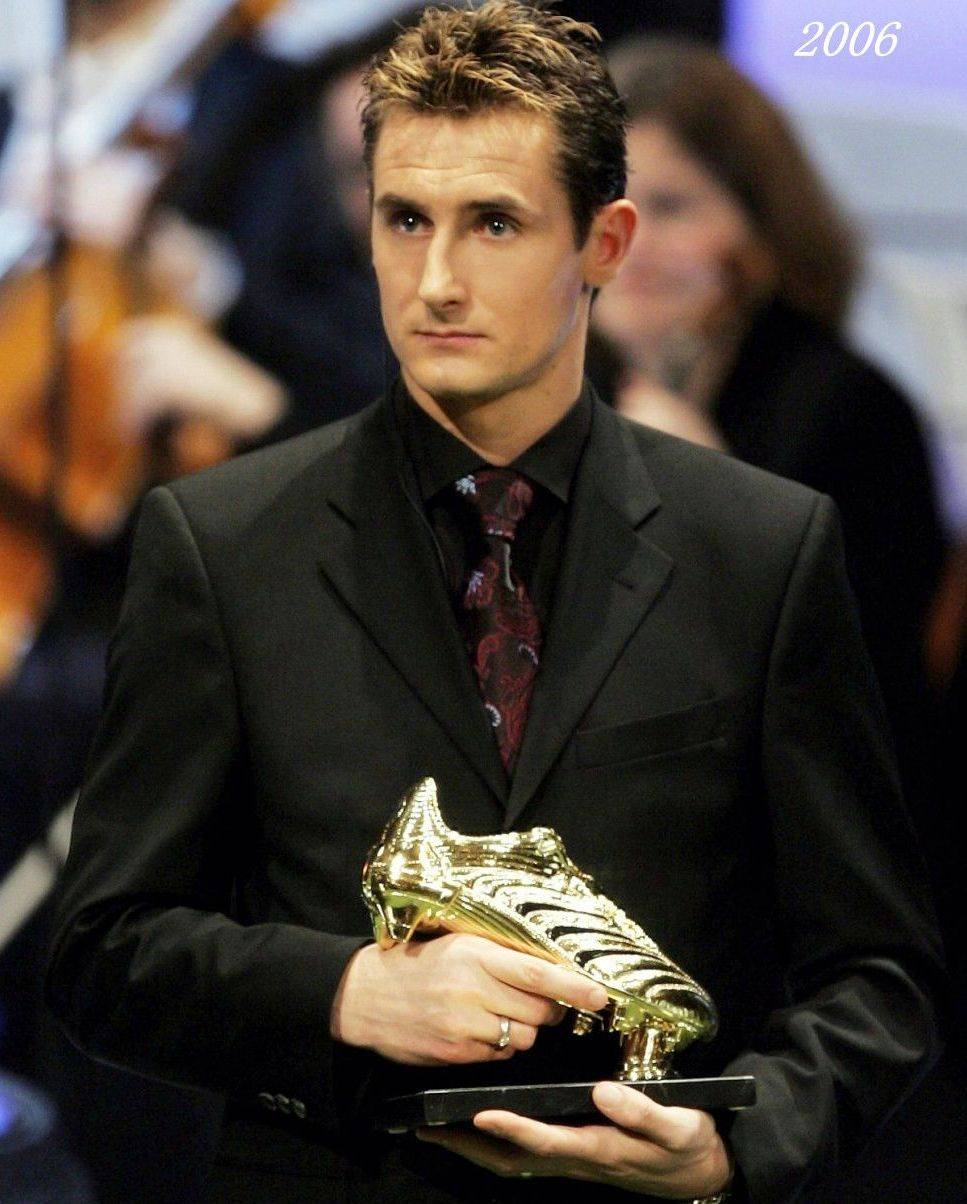 German footballer of the year: 2006

Top scorer of all time in the FIFA World Cup (16).

All-time scorer of the national team of Germany (71).

The only player who has had four or more (consecutive) World Cup medals.

Only male player who appeared in four or more semifinals (consecutive) in the World Cups.

He scored at least five goals in two World Cups, a record shared only with Teófilo Cubillas and Thomas Müller.

Record for scoring most header goals in a single edition of the men's World Cup.

One of the eight players in the history of Serie A to score five goals in a match.

He was hired to be part of the technical team of the German national team in November 2016.

Bayern Munich signed a two-year contract with Klose as their coach for the U17 team in May 2018. 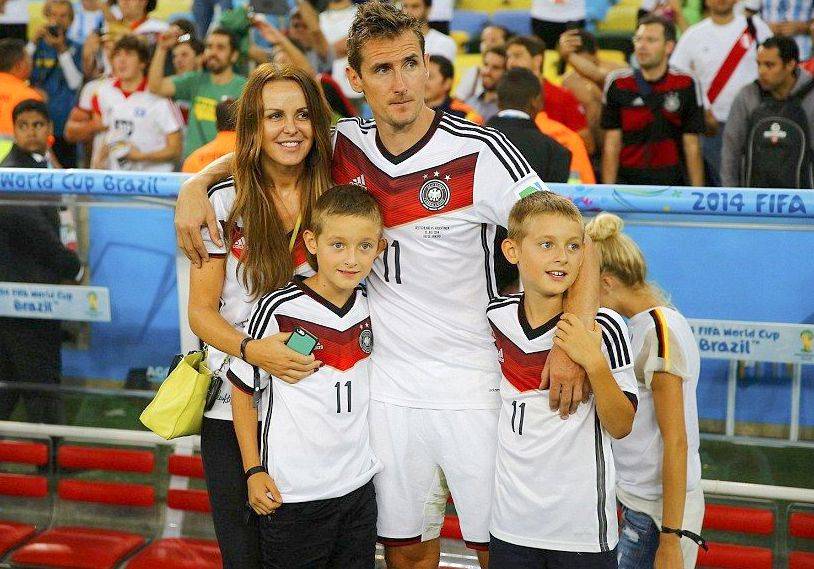 Who is Miroslav Klose married to?

Miroslav Klose is a married man. He is married to Sylwia Klose. They married in 2004. The couple has two twin children, Luan and Noah.

How tall is Miroslav Klose?

Miroslav Klose is at a height of 1.82 m, that is, 6 feet high. It has a body weight of 182 pounds, that is, 182 kg. It has an athletic constitution. He has dark brown eyes and his hair color is also dark brown.

What is the net worth of Miroslav Klose?

Miroslav Klose is a retired professional soccer player. He earned his football career until his retirement from professional football in 2016. He is currently signed with Bayern Munich as his coach U17. Its net worth is estimated at $ 35 million.