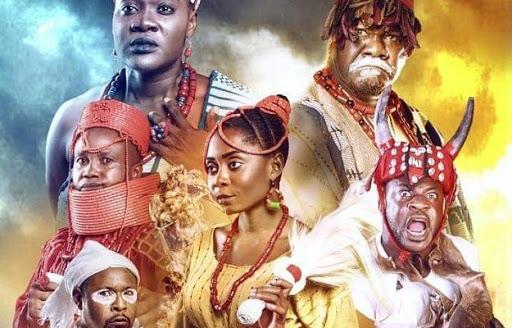 When we profiled Mercy Johnson, the author made a point about how slowly Mercy Johnson made the move to the big screen, and she concluded that Mercy had the body, talent, and personality for the big screen. With “The Legend of Inikpi” Mercy Johnson has now made her debut as a producer. Mercy Johnson has now joined the biggest stars in Nigeria to make the switch to filmmaking. We saw Genevieve with “The Lionheart”, we saw Ramsey Nouah with the sequel to “Living in Bondage” and we are used to seeing Funke Akindele as a filmmaker, which she solidified with her dizzying film “Your Excellency”. “Small Chops” is in the cinema right now and it’s a creation by Chika Ike. So Mercy Johnson Okojie’s filmmaking is a trend that older actors started with. In fact, it’s a good thing for superstars to bring their expertise, influence, and resources to the making of the new Nollywood that we would all be proud of.

But how did Mercy Johnson deal with her film? Not that bad.

One aspect in which Mercy Johnson scored A was to bring a popular cultural story to life. The old Nollywood is mainly about the culture of the Igbos, which by the way is bastardized on the set. The TV aspect of old Mollywood, which peaked with Wale Adenuga’s Super Story, is more Yoruba-oriented. The north is poorly represented in the mainstream Nollywood. Igala is the Middle Belt but is north of Niger and is one of the powerful non-Hausa cultures before the white man pale on our banks and interrupted our development. The Igalas, the Jukuns and the Binis formed a triumvirate of kingdoms that ruled parts of Central Nigeria and extended to Onitsha in the east and Cameroon in the north. It’s a great thing that an aspect of ancient Igala’s story comes to the screen.

We believe that we can see the story of Queen Amina, Bayajidda, Kanem-Bornu, the Jukuns, the Nok civilization, the Kwarararafas etc. We have stories, some of which are well documented. Absent documents, we have strong oral versions today. They can refuse to teach history in schools, but they can’t stop our stories from making the big screen. The story of the legend of Inikpi is a concept that deserves every commendable applause.

What the Inikpi legend did wrong

The first problem I have with “The Legend of Inikpi” is that the whole film is a story that someone tells a white man. Why should the story be told and not just happen? And why are you telling a white man? Is this a way of saying that our stories are not relevant until they pass the patronizing nose of the West? Do the authors say that the Inikpi story is one that everyone in Nigeria knows so well that we only have to export it? Telling a white man that this story was the filmmaker’s first wrong move.

The vision of “The Legend of Inikpi” is in a dark shade to show that it is a flashback and that it was a long time ago. This is a mistake for a handful of reasons. First, the flashback is the main story, so there was no need to differentiate it with a darker view. It is understandable to use black and white images for flashbacks that take a minute or two. But if your entire story is a flashback, it doesn’t make sense. Second, the film can be seen in the cinema, where the joy of watching a colorful 4K piece lies. Mercy Johnson has taken away this satisfaction.

Surprisingly, the language used in the film was largely English. Inikpi did not speak a single word of Igala, Mercy Johnson, who played her mother, did not speak; Sam Dede’s attack spoke one or two sentences of Igala. The chiefs, the high priest and the villagers were a great disappointment. I expected a lot of interactions to take place in Igala. In fact, one of the main characters, perhaps the high priest, should have spoken about Igala throughout the film. Greeting the king and singing in Igala are the main ways in which the Igala language is heard in the film. it is painfully inadequate. The same applies to the Beninese side of history. We have heard so few Beni that we may be asked to forgive because it is an Igala film. But how do we forgive the lack of proverbs in the series? The entire film consists of two or three proverbs. It is unforgivable.

The actors were not invisible, you can still tell that they are actors. The chief priest played by Saheed Balogun was a disaster. He didn’t have the character – he played the character of an oracle instead of becoming an oracle on set. The girl Naoma Ameh who played Inikpi was good, but she still had aspects of a beginner around her. This becomes clearer from the fact that she had nothing to do in the film. She was just about to share bites and peck her nose. If the authors had written tasks for their character, it would have stretched the star in them. For most of the show, it seemed like she was sitting, hands in her lap, waiting to be taken and sacrificed. Sam Dede as Attah was average and Mercy Johnson was boring.

Other history problems include the fact that an Oba from Benin, played by Paul Obazele (as usual), would never leave his palace and not for an Igala princess dance, the inability to show Inikpi’s siblings, the fact that the custom was so modern, and the sight of modern pillows, the unconvincing Inikpi tomb, which never contained ten girls, the bad dialogue in the film, the lack of any demonstration of supernatural powers, etc.

Since the story of Inikpi is mostly known or can be told in a few lines, the film should only be about the story. The film should have demonstrated the story and added layers. For example, the emotional connection in the film is missing. The Igala attack the Binis after they have committed some kind of betrayal by the Bena Oba. We have seen children and women attacked. It cost the Igalas the mood of the audience. We should have been shown men, from head to toe, sword against shield, clashes, blood for blood, fighting, anger. This is a movie, dear mercy, entertain us. Let us see how the heads roll over the dust, the eyes are pricked out and the limbs fly in the air. This fight will increase the adrenaline of the audience and make them nervous so that we can see what would happen to Idah if they lost the war.

READ:  Timini Egbuson As Best Actor In A Movie? It’s Time For AMVCA To Change Their Format

In the legend, I heard that Igala waters were poisoned and farmland was burned. Show us starving children and people who die from drinking water. Leave there His an existential crisis and no belief that it will be an existential crisis. Let the elders try many things by sacrificing cows, sacrificing adulterers anything but Inikpi first. If they do all of this and we see deep concerns, we will cry when it is time to sacrifice Inikpi. A subplot could also have helped. An Igala soldier, whose wife has been sterile for nine years and whose wife is now pregnant and about to give birth, will fight the binis and is unsure whether he will return. Or a widowed woman whose only son is brought home dead. Or a boy whose twin brother is killed before his eyes and who gets his head to show his parents. No great story is without powerful subplots. Can you imagine “Things Fall Apart” without the story of Ikemefuna?

Mercy Johnson and director Frank Rajah Arase missed the unique opportunity to show us that our legendary stories can be shown powerfully and entertaining. The fact that this is Mercy Johnson’s first film is no excuse. The fact that it didn’t do justice to an important cultural artifact is blasphemous. It’s easy to hear people on Twitter asking for stories from our gods like Sango and Amadioha and Idemili and hundreds of others. But with the disappointing show “The Legend of Inikpi”, many will not look forward to future cultural stories as much as they should. The Inipki film could have been an impressive example of how successful our legendary stories on the big screen can be and inspire dozens more. You missed the opportunity.