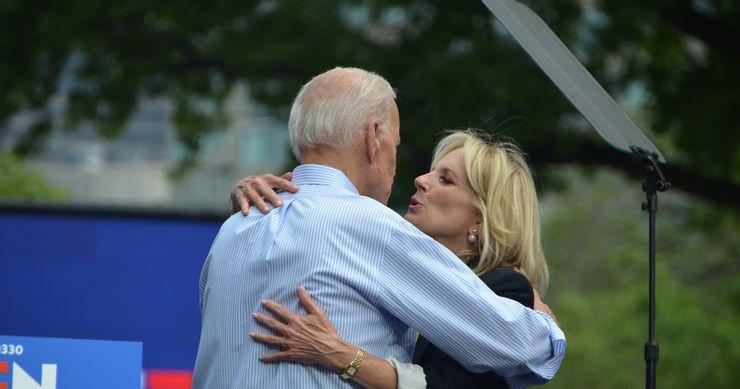 Jill Biden bio: Jill Tracy Jacobs was born in Hammonton, New Jersey, on June 3, 1951. Her father was a bank teller while her mother stayed home full time to care for the family’s five daughters. The oldest of five sisters, she grew up in the Philadelphia suburb of Willow Grove. Prior to marrying Joe, she was married to former college football player Bill Stevenson.

Joe’s first wife was his college sweetheart, Neilia Biden. Neilia and the couple’s 1-year-old daughter, Naomi, were killed just before Christmas in 1972 when a tractor-trailer slammed into their station wagon, per Biography. Biden’s sons Beau and Hunter were severely injured in the crash as well but ended up recovering.

When they did marry, Beau and Hunter, stood by the couple at the altar. The four of them went on the honeymoon together because Joe and Jill felt that all of them were marrying each other and forming a family. Now they were her sons.

Mrs Biden, 69, has spent decades working as a teacher.

As well as a bachelor’s degree, she has two master’s degrees, and a doctorate of education from the University of Delaware in 2007.

Prior to moving to Washington, DC, she taught at a community college, at a public high school and at a psychiatric hospital for adolescents – she gave her address at the Democratic Party’s convention this year from her old classroom at Delaware’s Brandywine High School, where she taught English from 1991 to 1993.

While her husband served as vice-president, Mrs Biden was professor of English at Northern Virginia Community College.

“Teaching is not what I do. It’s who I am,” she tweeted in August.

Mrs Biden previously held the title of Second Lady while her husband served as vice-president from 2009 to 2017.

During this period, her work included promoting community colleges, advocating for military families and raising awareness about breast cancer prevention.

In 2012, she published a children’s book called Don’t Forget, God Bless Our Troops based on her granddaughter’s experience of being in a military family.

She has been a prominent supporter of her husband during the 2020 campaign, appearing alongside him and holding events and fundraisers.