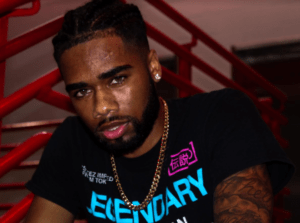 Dewuan Andrew Elfalan Jr. known as Elfalan Don is an American rapper, songwriter and engineer from Louisville Kentucky. The name comes from Elfalan being his last name and Don being his mentality for success.

Elfalan Don was born September 13, 1997 in Louisville Ky. He was really into baseball from a young age until he was in high school. He attended Pleasure Ridge Park High School. He also did a year of track to improve his speed on the baseball field. He grew up with his two parents, his older sister and his little brother. After high school, he attended Eastern Kentucky University as a business and accounting specialist.

It all started when his childhood friend sent him a 2pac picture me rollin ‘remix while he was in the college cafeteria. After that he thought he should give it a try and when he made his first song he fell in love with the process and the result. He bought his own studio equipment and started rapping in the dorm closet at EKU. He would go around the cafeteria and campus asking random people to listen to his music to see if they liked him. Over time, he realized that if he wanted to become a professional, he had to be surrounded by professional engineers. He started recording at the Lexington Ky Dojo until he had to return to Louisville and then started going to 400 recording studios. He wanted to cut out the middleman, so he decided to buy improved studio equipment and taught himself how to conceive of himself and other people.